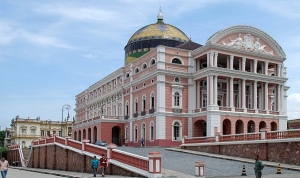 The Amazonas Theater, administered by the Government of the State through its Secretariat of Culture, had its building started in 1882 and inaugurated on the 31st of December, 1896, at the peak of the economic rubber cycle, during the administration of Fileto Pires Ferreira. It is the major architectural cultural heritage of Amazonas. Although it is predominantly neo-classical in its elements, various other styles were used in the building, which characterize it as an eclectic work. Inscribed as a historical endowment on November 28, 1966, this centennial building has a capacity for 701 persons in the audience and box seats. After its 1990 restoration undertaken by the State Government, it regained its aplomb with the presentation of the Amazonas Opera Festival and the presentation, on its stage, of classical and popular programs of dance, music and theatre with local, national and international artists.